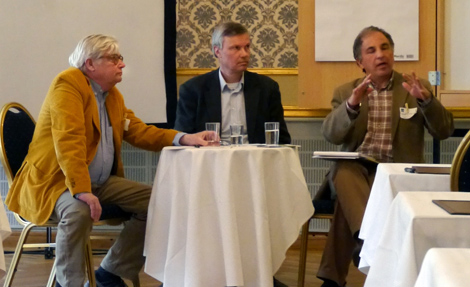 The theme of this year’s conference was Evaluating transitions to sustainable societies. On day two of the meeting, Mistra EviEM led a session on Evaluators as a bridge between scientists and decision-makers. The panel invited to discuss this topic consisted of Fredrik Wulff, emeritus professor at Stockholm University’s Department of Ecology, Environment and Plant Sciences, Anders Turesson, senior adviser and principal secretary at the Swedish Ministry of the Environment, and Edwin Zaccai, professor at the Centre d’études du développement durable, Université Libre de Bruxelles.The focus was on the need for better communication between researchers and decision-makers. Among the points emphasised were the importance of a more interdisciplinary approach in environmental research, better geared to the needs of decision-makers, and the need for researchers to more clearly communicate what they know, rather than highlighting the gaps in knowledge that remain.

One suggestion for improving communication was to establish more forums like the Intergovernmental Panel on Climate Change (IPCC), in which scientists and decision-makers can meet and work together. The panel was also agreed that one difficulty arising in communication between the two communities was the fact that, despite the variation and uncertainty which all research involves, decision-makers need to reach decisions on what action to take. They therefore often want to hear the researchers’ ‘best guess’, fully aware that this involves uncertainty – a guess which many scientists are hesitant to provide. Good evaluations of the effectiveness of action taken are an important source of feedback for both researchers and decision-makers, and can facilitate communication between them.

Read more about the EEEN on the Environmental Evaluators Network website.