During a four-week period in November and December, four EviEM review team meetings were held in Stockholm. The teams dealing with systematic reviews or maps on fish recruitment, vegetated strips, road side management and prescribed forest burning gathered at the Stockholm Environment Institute, at Victory Hotel in Stockholm’s Old Town, or at Steningevik Conference centre.

At the meeting on the systematic map on impacts of vegetated strips within and around fields (SR8), led by Neal Haddaway and chaired by Sönke Eggers, the team discussed studies that were highlighted as doubtful during screening of the full texts. The team also made plans for future work, including a communications plan and ideas for visualising results. The team will meet again in May 2017 to discuss the final stages of the mapping process.

The research team working with the systematic review of road side management had their third meeting on December 7th-8th. Part of the meeting was dedicated to refining the team’s first output; a systematic map of the existing evidence on how management of road sides affects the diversity and dispersal of species (SR9). The team, which is led by Claes Bernes and chaired by Regina Lindborg, has also initiated a full systematic review of how the diversity of vascular plants and invertebrates along roadsides is affected by management methods such as mowing, grazing, burning and selective mechanical removal of plants (SR17, upcoming). A revised review protocol is about to be completed. During the meeting the research team also established principles for critical appraisal of studies within the topic. The next step in the process is to extract and analyse results from studies that are considered to be useful. 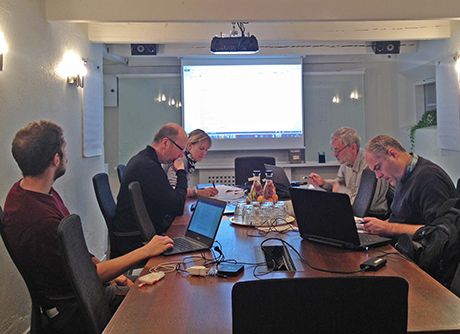 The team for SR9 at the meeting on December 7-8. Photo: Simon Jakobsson.

On November 29th-30th, the first physical meeting of the advisory team and working group for the review on biodiversity effects of prescribed burning of temperate and boreal forests (SR15) was held. EviEM’s Director Sif Johansson welcomed the advisory team and thanked them for their input. The team, led by Jacqualyn Eales and Neal Haddaway, received an update on the progress of the review to date. Most of the potentially useful literature has now been assessed at full text for relevance. The review team discussed how to handle a larger number of studies than expected and made definitive decisions on a number of borderline study inclusion decisions. Other topics covered were various study designs encountered, non-English studies and preliminary plans for critical appraisal. The meeting provided clarification for meta-data coding to be undertaken, and it was decided that the next meeting be planned for early spring 2017 to finalise plans for critical appraisal and later stages of the review. 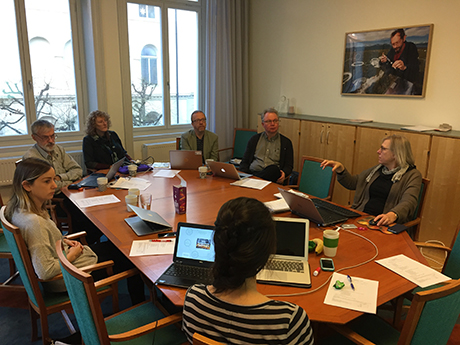