During the first week of April, the workshop “Methodologies for Systematic Review and Evidence Mapping ” was held in Santiago de Chile. Organized by CESIEP – the Center for Socioeconomic Impact of Environmental Policies, it was lectured by CEE Training Experts, Neal Haddaway and Jacqui Eales, and it gathered academic researchers and public government members related to environmental and development areas. Karla Riquelme, CESIEP communications manager, reports from the workshop.

Bringing scientific knowledge to the design of environmental public policies is one of the main lines of work of the CESIEP  Millennium Nucleus – the Center for the Impact of Environmental Policies, which is led by Dr. Rodrigo Arriagada, an academic at the Department of Ecosystems and Environment of the Pontifical Catholic University in Chile. 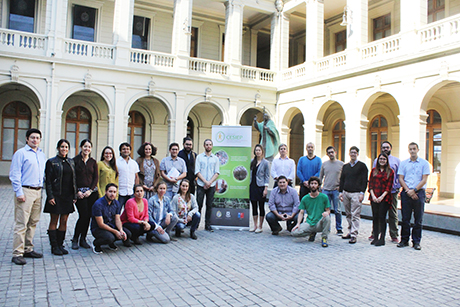 With this objective in mind the workshop Methodologies for Systematic Review and Evidence Mapping was carried out, the first of its kind in Chile. The workshop aimed to disseminate these methodologies that have proven to be very useful in generating guidelines for environmental public policies based on scientific evidence. This contributes to the creation of more efficient, effective and adequate policies for the territory in which they will be applied, either in environmental conservation, sustainable territorial development and other areas linked to the environmental sciences. In Chile, the connection between science and public policies is incipient and through training in these methodologies, the CESIEP Millennium Nucleus aims to contribute to bring science closer to decision makers.

The lecturers Dr. Neal Haddaway and Dr. Jacqui Eales, EviEM project managers from Sweden and England respectively, are certified trainers by the Collaboration for Environmental Evidence (CEE), the most reputed organisation in these methodologies. CEE coordinates and defines the standards of systematic reviews applied to the environmental sciences, and organises a network of international centers that work with them. This workshop was the first step towards the formation of the future CEE Center in Chile, which would be the first of its kind at a regional level in Latin America. In Haddaway’s words, “This is a great initiative for Chile and the systematic reviews community. Training in these important skills is always a priority for us, but doing so in a new country and a new continent is a cause for celebration. We are really looking forward to what will be done in this region and how the group and community formed around these methodologies will begin to grow“.

Systematic reviews and evidence mapping are a rigorous, detailed and thorough review of all academic literature in a given field. They differ in the way they are addressed, since each stage is planned and documented in detail, delivering reports that transparent the investigative process. During the first three days of the week, the participants explored why these methodologies are necessary for the design of public policies and how they seek to address the problems and bias associated with traditional bibliographic reviews. 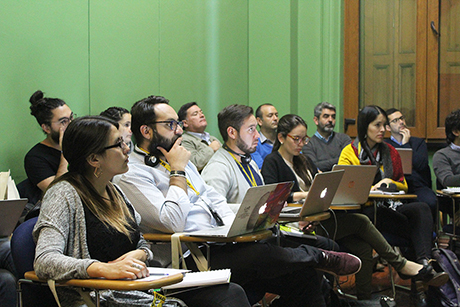 For Arriagada, the Director of CESIEP, one of the greatest achievements of the workshop was the wide-ranging call that it had; bringing together 24 professionals related to the research that involves the design of public policies, from the public sector and academia. It was attended by representatives of the Department of Environmental Economics of the Ministry of the Environment, Ministry of Social Development, Agricultural Policies and Studies Office (ODEPA), along with analysts from the Natural Resources and Development sections of the Technical Advisory Office in the National Library of Congress, Members of the Center for Applied Ecology and Sustainability (CAPES), the Department of Agrarian Economics from the University of Talca, the Laboratory of Ecology and Landscape from the University of Concepción, the Center for Economic Research and Teaching (CIDE) Mexico and the Tropical Agriculture Research and Higher Education Center (CATIE) in Costa Rica.

This initiative was financed by the Millennium Scientific Initiative Program of the Ministry of Economy, Development and Tourism of the Government of Chile, which fosters the development of scientific and technological research in the country and by the Vice-Rectory of Research of the Pontifical Catholic University.

The CESIEP consists of a group of researchers and was born to respond to the need to have objective assessments of environmental policies incorporating biophysical, economic and socio-political contexts, jointly analyzing socio-economic and environmental impacts, and identifying mechanisms to explain these impacts. It is housed in the Pontifical Catholic University, the University of Talca and the University of Concepcion in Chile.