What are the possibilities of conserving or restoring valuable forest ecosystems by manipulating the populations of grazing and browsing animals? EviEM has investigated how changes of the grazing/browsing pressure by game and livestock affect forest plants and invertebrates. 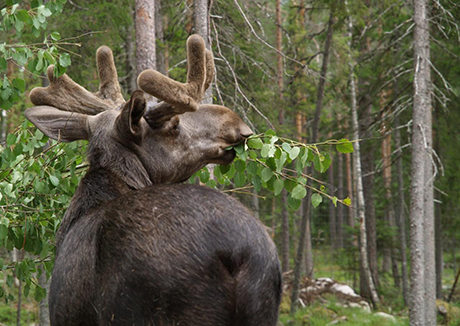 The elk (Alces alces) is one of the most important browsers in Swedish forests. Photo: Anna Fuster/Creative Commons.

Too much grazing? Or too little?

In many parts of the world, human activities have greatly influenced the abundance and species composition of large herbivores. In some cases, this has resulted in either very high or very low herbivory pressure.

‘Overabundance’ of native wild herbivores has frequently been identified as a major challenge for forest regeneration and biodiversity conservation. On the other hand, a lack of mammalian herbivores can also have negative effects on biodiversity. Consequently, management of herbivory can be a critical tool for forest conservation.

However, there has been a shortage of quantitative assessments of the effects of grazing and browsing on forest biodiversity. To synthesise the available evidence, therefore, we have undertaken a systematic review of studies of how manipulation of ungulate herbivory affects plants and invertebrates. Ungulates include all species of deer and other cervids, and also livestock such as cattle, sheep, goats, horses and their relatives in the wild.

The ultimate purpose of the review was to investigate whether manipulation of the grazing pressure is useful as a means of conserving or restoring biodiversity in protected forests. Nonetheless, we also included any useful studies made in forests under commercial management. Our focus was on forest types represented in Sweden, but we searched for relevant studies made in boreal or temperate forests anywhere in the world.

Most of the 144 studies included in the review had been conducted in North America, Europe or Australia/New Zealand. The intervention most commonly studied was experimental exclusion of wild and/or domestic ungulates by fencing. We also included studies of enclosure or culling of game, and of long-term forest grazing by livestock.

The red dots on the map show the locations of studies included in the review. The green colour indicates the extent of the boreal and temperate climate zones.

A major finding of our review was that the impacts of ungulate herbivory on bio­diversity are highly affected by the context (e.g. climate, forest type, management history and herbivore identity). Several effects on vegetation depended on whether the ungulates were native, introduced or domesticated, but the duration and intensity of herbivory manipulation had limited influence.

Overall, our findings suggest that manipulations designed to reduce high levels of ungulate herbivory could be used to encourage regeneration of certain tree species without concerns about reducing the diversity of herbaceous understorey or invertebrate communities. However, plans to (re-)introduce ungulates or increase their abundance need to carefully consider potential undesirable effects on biodiversity and tree regeneration, especially if the manipulations will involve non-native ungulates or livestock.

Our results also indicate that conservation management based on livestock in forests should seek to optimise the positive impacts of grazing on herbaceous plant richness while at least occasionally allowing tree saplings to reach maturity. The balance between these two targets should be specified on a site-by-site basis.

This systematic review was conducted by a specially appointed team of researchers chaired by Bengt Gunnar (Bege) Jonsson, professor of plant ecology at Mid Sweden University in Sundsvall, Sweden. The main part of the work was carried out by Claes Bernes, Asko Lõhmus, Ellen Macdonald and Biljana Macura.

Initially, in 2015, the review team published a systematic map of the evidence on how different forms of active management affect forest biodiversity (see EviEM SR6). A systematic map provides an overview of existing studies of a certain topic, but it does not synthesise their findings. From the more than 800 studies that were included in the SR6 systematic map, we selected those that provided useful data on effects of manipulation of ungulate grazing/browsing. These data were then synthesised by means of meta-analysis.

The final report on the systematic review was published in April 2018. Results have also been published in a popular summary and a fact sheet (see links at right). 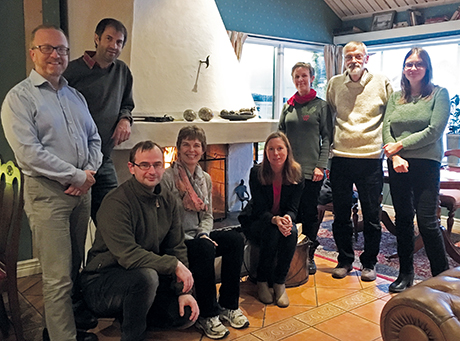