To what extent do urban green spaces contribute to ecosystem services?

The interest among researchers in the importance of urban green areas has increased dramatically, and EviEM has reviewed and summarised eight systematic reviews on the topic, published between 2010 and 2015. Only two of these reviews, however, were conducted in such a way that they could provide quantitative conclusions. 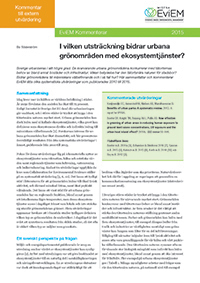 The focus of the evaluations were on ecosystem services that contribute to non-tangible benefits such as recreation, health and aesthetic values, or services in the form of air and water purification, noise reduction and temperature control.

The literature showed a clear support in urban green spaces contributing to increased physical activity, and thereby reduced obesity, and increased psychological well-being. There was also some support for that green spaces, at least locally, can lower the air temperature. According to one analysis, the temperature is on average 0.94 degrees Celsius cooler during the day than the surrounding urban areas, and 1.15 degrees Celsius cooler during the night.

To what extent do urban green spaces contribute to ecosystem services?