It was usually public agencies and other decision-makers and stakeholders in the environmental sector that proposed the subjects for EviEM’s reviews. The aim was that they should be able to benefit from the results and turn them into practical environmental measures. The final decisions on which issues to review were taken by EviEM’s Executive Committee.

Every review was conducted as a project by a specially appointed team comprising researchers in the area concerned and a project manager from the EviEM Secretariat. The results were published in comprehensive scientific reports, but they were also presented in popularised summaries in Swedish and English. 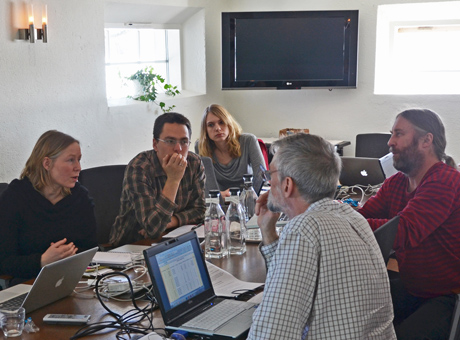 EviEM’s first review dealt with the effects of reindeer grazing on alpine and arctic vegetation. This picture was taken during the second meeting of the review team. Photo: Bo Söderström.

To survey the scientific documentation on various environmental issues, EviEM used a method known as ‘systematic review’. A review of this kind involves a meticulously planned and documented search to find every scientific publication that may be of interest in the context. Results from the studies that prove useful are then summarised and compared. Work in this stage, too, is documented with great thoroughness, and this enables the review and its assessments to be subsequently examined in detail.